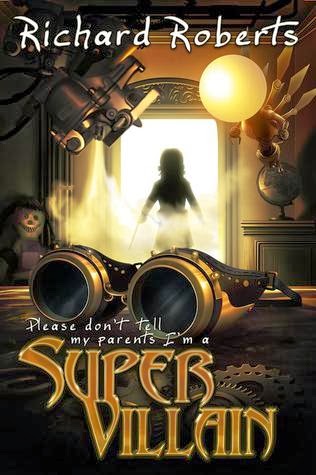 Penelope Akk wants to be a superhero. She's got superhero parents. She's got the ultimate mad science power, filling her life with crazy gadgets even she doesn't understand. She has two super powered best friends. In middle school, the line between good and evil looks clear.

In real life, nothing is that clear. All it takes is one hero's sidekick picking a fight, and Penny and her friends are labeled supervillains. In the process, Penny learns a hard lesson about villainy: She's good at it.

Criminal masterminds, heroes in power armor, bottles of dragon blood, alien war drones, shape shifters and ghosts, no matter what the super powered world throws at her, Penny and her friends come out on top. They have to. If she can keep winning, maybe she can clear her name before her mom and dad find out.(less)
Paperback
Expected publication: February 15th 2014 by Curiosity Quills Press
ISBN139781620074633
edition languageEnglish

Enter here for a chance to win a copy

Richard Roberts has fit into only one category in his entire life, and that is ‘writer’, but as a writer he’d throw himself out of his own books for being a cliche.

He’s had the classic wandering employment history – degree in entomology, worked in health care, been an administrator and labored for years in the front lines of fast food. He’s had the appropriate really weird jobs, like breeding tarantulas and translating English to English for Japanese television. He wears all black, all the time, is manic-depressive, and has a creepy laugh.

He’s also followed the classic writer’s path, the pink slips, the anthology submissions, the desperate scrounging to learn how an ever-changing system works. He’s been writing from childhood, and had the appropriate horrible relationships that damaged his self-confidence for years. Then out of nowhere Curiosity Quills Press demanded he give them his books, and here he is.

As for what he writes, Richard loves children and the gothic aesthetic. Most everything he writes will involve one or the other, and occasionally both. His fantasy is heavily influenced by folk tales, fairy tales, and mythology, and he likes to make the old new again. In particular, he loves to pull his readers into strange characters with strange lives, and his heroes are rarely heroic.