Four children separated by vast distances all undergo the same ritual, watched by cloaked strangers. Four flashes of light erupt, and from them emerge the unmistakable shapes of incredible beasts - a wolf, a leopard, a panda, a falcon. Suddenly the paths of these children - and the world - have been changed forever.

Enter the world of Erdas, where every child who comes of age must discover if they have a spirit animal, a rare bond between human and beast that bestows great powers to both. A dark force has risen from distant and long-forgotten lands, and has begun an onslaught that will ravage the world. Now the fate of Erdas has fallen on the shoulders of four young strangers . . . and on you.

The characters are spectacular.  I like the way the 'outsiders' were the chosen ones in this series.
Wonderful writing style.

Friendship and working together for a goal are common themes in Mull's stories.  This is a multiplatform series, meaning it will be written by several authors.
Posted by Donna at 9:00 AM No comments: 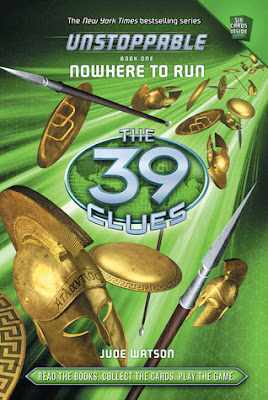 The 39 Clues is unstoppable! The bestselling series returns with an adventure spanning four explosive books and a website that places readers right in the action.

The Cahill family has a secret. For five hundred years, they have guarded the 39 Clues – thirty-nine ingredients in a serum that transforms whomever takes it into the most powerful person on earth. If the serum got into the wrong hands, the disaster would rock the world. So certain Cahills have always made it their mission to keep the serum safe, buried, locked away. Until now.
Thirteen-year-old Dan Cahill and his older sister, Amy, are the latest guardians of the Clues. They think they’ve done everything right, but a tiny mistake leads to catastrophe. The serum is missing and Dan and Amy have to get it back and stop who stole it . . . before it’s game over. For everyone.

my thoughts
Unstoppable is a continuation of 39 Clues stories.   Someone has created the serum and is using it to take over the world!

This is a wonderful addition to the series.  Adventures of Amy and Dan Cahill continue.  They are joined by Nellie, Pony, Ian, Jake, Atticus and Jonah.   This is a wild ride of ups and downs.  If you like the series, this will be a welcome addition.

We give this book 5 ice cream cones. 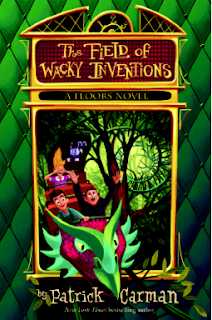 Taking mystery and adventure to the next level.

It's not every day that a hotel loses its top floor. Then again, the Whippet Hotel is no stranger to wackiness. So when the entire floor is hoisted into the night sky by a nearly invisible airship, Leo and Remi know they're in for the ride of their lives.

But little do the boys know just how amazing their voyage will become. They are headed to the field of wacky inventions, where they will have to compete against a number of foes for an incredible prize.

It will take all of Leo and Remi's bravery, skill, and burping power to decode the outrageous puzzles hidden among the floors of Merganzer D. Whippet's newest and most peculiar construction. But they must -- because if they don't, they'll lose their beloved Whippet Hotel forever.

This is a fabulous finish to the series.  A book that any middle grade student, boy or girl, would love to read.  The vocabulary is appropriate for the age group without being intimidating.  The plot and story
will keep the readers attention.

The addition of Lucy and her pet TRex Phil add a new dimension to the story.  A girl handy person added to the Leo-Remi duo.   Her addition only helps the duo.

Love this story.   Lucy and Phil, her pet TRex are awesome additions to the story.   This is the end of the Floors books. :(   Hopefully Mr. Carmen will write another great series for us kids to read.  He really and truly makes reading fun.  I wish I could visit the Floors hotels!