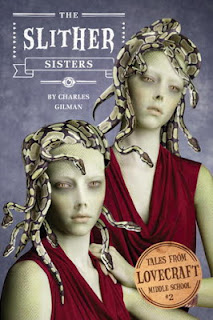 This second novel in the Tales from Lovecraft Middle School series begins right where Professor Gargoyle ended.  Seventh-grader Robert Arthur has discovered that two of his classmates are actually sinister snake-women in disguise. Even worse, his new middle school is full of “gates” to a terrifying alternate dimension – a haunted mansion full of strange spirits and monstrous beasts.  For Robert to protect his teachers and classmates, he'll need to return to this haunted dimension with his best friends Glenn and Karina.   Can they uncover the secrets of Lovecraft Middle School before it's too late?

The Slither Sisters features more bizarre beasts, more strange mysteries, and more adventure.  It's perfect for readers ages 10 and up. Best of all, the cover features a state-of-the-art “morphing” photo portrait – so you can personally witness the sisters transforming into their slithering alter egos.  You won't believe your eyes!

What a fun series!  Book two is a fantastic continuation of the Tales from Lovecraft Middle School.  A school being overtaken by monsters.   The characters are fun and engaging. The storyline is wonderful.  This is a series that will encourage middle grade students to read!  It is a unique story.   Kids, both boys and girls, will love the characters of Robert, Glen and Karina.  Pip and Squeak are fun, too- even if they are rats!  I'm anxiously awaiting the third installment in this series and I highly recommend it for anyone who likes different stories.

And don't miss book one of the series 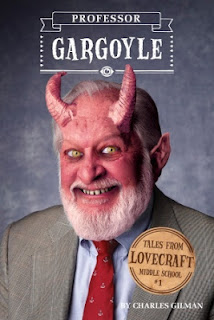 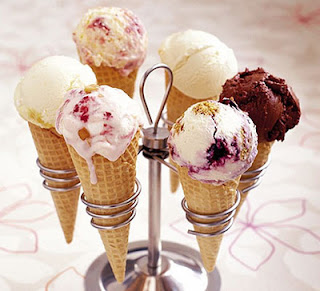