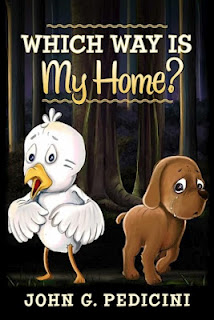 WHICH WAY IS MY HOME?
by
JOHN G. PEDICINI

I received this book from the author for an honest review.

An Ivory seagull loses his Arctic home when his iceberg melts. He meets a friendly snail, Poco, who helps him on part of the journey. But, the seagull is afraid of the world and cannot find a home. He moves slow and cannot keep up with the other Ivory seagulls, earning him the nickname, "Slow Moe". As a result, the other seagulls shun him and force him off the docks. When Slow Moe crash-lands in a dark forest, he encounters a lost group of children and their puppy. However, a hungry pack of coyotes are lurking in the darkness. They keep watch on the group and prepare for an attack. Can the group escape danger and find their way home? Can they rescue their puppy who was taken by the coyotes ? And who will lead them through the darkness ? The story is an action-packed adventure that will keep you on the edge of your seat waiting to read the next page. Colorful and detailed graphics will make you feel as if you are in the forest with the group. Keep running! The coyotes are gaining on you!

MY REVIEW:
A delightful tale that will be enjoyed by small children. Slow Moe is a marvelous character who is different from other seagulls in that he doesn't have their speed. He is shunned by the others and has to fend for himself. He is later aided by a snail named Poco. Together, the two of them crash land in a forest and help a group of small children get away from a pack of angry, hungry coyotes.

Sounds scary, but it really isn't. I don't think small children will be frightened. The wonderful illustrations will help tell the story in a way that will have children rooting for Moe, his friends, and especially the small puppy.

The Kindle version does not do justice to the illustrations. I used the Kindle app on my Ipad to read the story and appreciate the pictures.

I give this story 5 stars. I think it will make a terrific story to read to children.