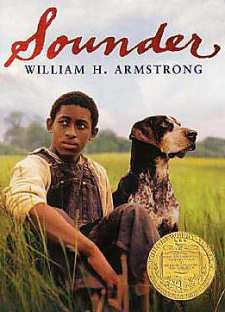 I read this book for a book report in school
Sounder by William H. Armstrong
written by Lucas Lawrence

Plot:  An African-American boy and his family live together in the 1800's with their coon dog Sounder.  The boy's father and Sounder love to go hunting together.  Sounder can catch small animals with his mouth without hurting them.  The family has barely enough food to survive.  One morning, an angry sheriff ran into their home and grabbed the boy's father, put him in chains and threw him in the back of the police wagon for a crime he allegedly committed.  The sheriff went into the house and threw the families dinner on the floor (nice guy).  Sounder starts chasing after the police wagon only to get shot in the side of his head.  An injured Sounder runs and hides.
The boy keeps calling for Sounder who is thought to be under the house.  He has no success finding the dog.  He brings a cake to his dad in prison.  Eventually, the boy finds Sounder.  He is alive but hurt.
The father is released from jail and returns home.  The boy meets a young teacher willing to teach him to read.  Sadly, both Sounder and the boy's father die.  Even though Sounder is no longer with him, he can still hear the dogs loud barks echoing across the land.

Review:  This was a very interesting book.  Not very fast paced, but an easy to read story about a boy growing up in tough times.  I think the father was sent to jail just because of his color.  We should be ashamed of our past.  We are all red blooded Americans, citizens of  Planet Earth, and we should all work together to make a better future.  We shouldn't be afraid of people who are different than us.
I liked meeting Sounder.  I love books with animals.  Animals accept you for what you are, they don't judge people who are in any way different than others.   I did not like the sad ending of the book.
Posted by Donna at 8:04 AM